James Fox’s performance in PERFORMANCE is incredible. His ability to transform, first, into the vicious East End gangster, and then into the kind, open and exploratory lover of Turner, Pherber and Lucy, is a remarkable act, unequalled – I think – in cinema.

The making of PERFORMANCE had a profound effect on James Fox, so much so that he quit acting for 10 plus years after the film wrapped and became a evangelical Christian, before eventually returning to acting. Donald Cammell said that James Fox had a “breakdown” during the filming. Fox himself has said that it was extremely difficult for him to recover after making the film.

The best telling of James Fox’s experience of making PERFORMANCE is in the documentary, “Donald Cammell: The Ultimate Performance,” in which Fox himself describes his experience and its aftermath.

Much later, James Fox wrote about his life, including the personal impact that PERFORMANCE made on him, in his book, Comeback: An Actor’s Direction, published in 1983. 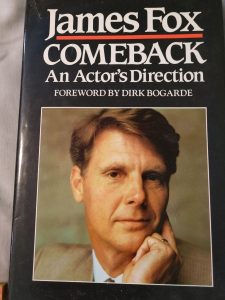 Here are some links to articles about James Fox’s performance in PERFORMANCE:

The Performance of a Lifetime

I didn’t take that much acid

James Fox and Sandy Lieberson: How We Made Performance