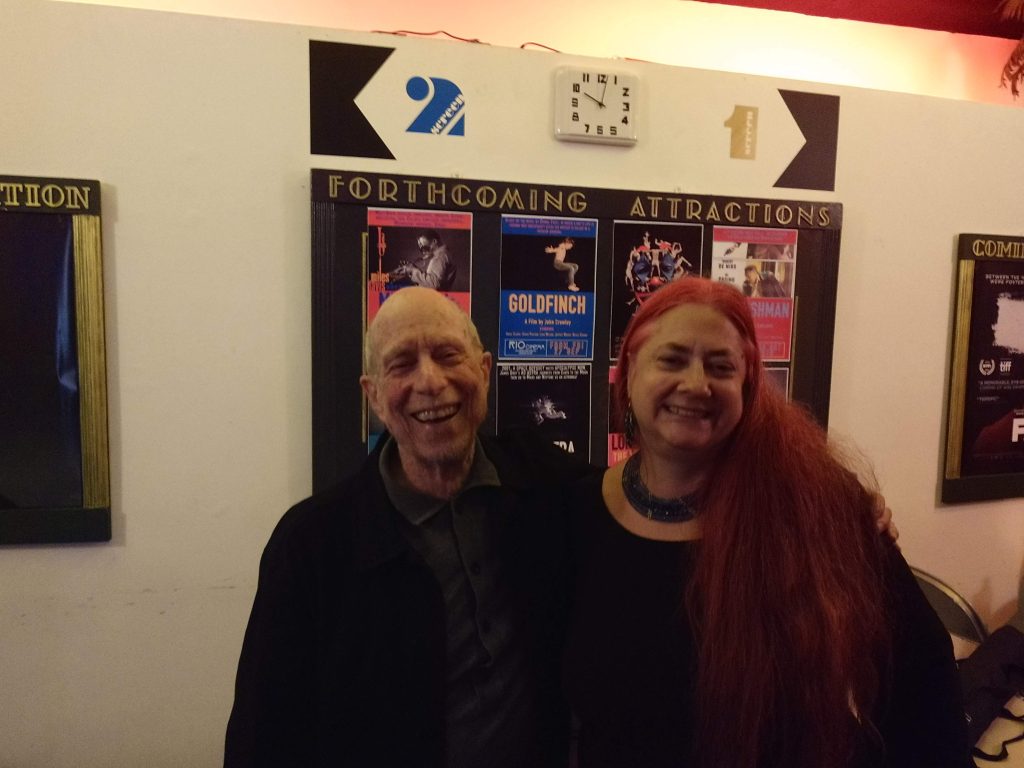 That’s me with PERFORMANCE Producer Sandy Lieberson, at the London celebration of the 50th Anniversary of PEFORMANCE in 2019.

I am a native New Yorker. As a teenager in the early 1970s I spent a lot of time hanging out in the Village. I first saw PERFORMANCE when I was 13 years old, with a friend,  in a small theatre in the East Village of New York City. Even though the film was rated X, in those days little theatres in the East Village weren’t carding. That is, they weren’t checking ages – or anything else – when we walked in. It was a much freer time, in that sense.  We originally went to see it because we were Stones fans. Little did we know what we were in for. My friend and I sat through two showings that day, because after the first showing, we were sitting there, saying, “What??”

This was before they had dubbed the film with less pronounced London East End voices. And of course we were trying to figure out what we had seen in that last shot of the car window.

I bought the soundtrack album at a local record store and listened to it constantly.

I saw PERFORMANCE again when I was 15, and sat through an entire day of showings. Each time I saw the film I saw more in it. That continues to this day, even though I’ve seen the film well over a hundred times.

PERFORMANCE shaped my life. Through it I discovered the multiplicity of sexual orientation and identity. My natural curiosity and inclination toward sexual exploration was encouraged. The film liberated me and showed me a path forward: an exploration of life and love and sexuality that carried me into the adventure of living each moment to its fullest.

To quote art historian and philosopher Walter Pater, in his famously influential (on Oscar Wilde, among others) 1881 conclusion to his book, The Renaissance:

“The service of philosophy, of speculative culture, towards the human spirit is to rouse, to startle it into sharp and eager observation. Every moment some form grows perfect in hand or face; some tone on the hills or the sea is choicer than the rest; some mood of passion or insight or intellectual excitement is irresistibly real and attractive for us – but for that moment only. Not the fruit of experience, but experience itself, is the end. A counted number of pulses only is given to us of a variegated, dramatic life. How may we see in them all that is to be seen…? How shall we … be present always at the focus where the greatest number of vital forces unite in their purest energy?

“To burn always with this hard, gemlike flame, to maintain this ecstasy, is success in life. While all melts under our feet, we may well catch at any exquisite passion, or any contribution to knowledge that seems by a lifted horizon to set the spirit free for a moment, or any stirring of the sense, strange dyes, strange colours, and curious odours, or work of the artist’s hands, or the face of one’s friend. Not to discriminate every moment some passionate attitude in those about us, and in the brilliancy of their gifts some tragic dividing of forces on their ways, is, on this short day of frost and sun, to sleep before evening.

“…The theory or idea or system which requires of us the sacrifice of any part of this experience, in consideration of some interest into which we cannot enter, or some abstract theory,… or what is only conventional, has no real claim upon us.”

I hope you enjoy the website I’ve created celebrating this extraordinary and powerful film that I love so much.

Here are some pictures from Jay Glennie’s 50th Anniversary of PERFORMANCE film showing and book signing event in London. That’s me and Sandy Lieberson, a pic of Larraine Wickins who played Lorriane in the film when she was a little girl, me with Larraine, Jay Glennie in his “The Last Poets” t-shirt and Jay in front of the event poster. It was a pleasure and an honor to meet them all.

For more about me, read this interview, or check out Punk Archive NYC.